An IPO (Initial Public Offering) is just the starting of a new life of a company. Before the IPO, the company was called a private company, and after listing, it'll be known as a public company.

The IPO brings many changes in the functioning of the company like the way management works, the entry of new shareholders, the risk of retail investors, and the list goes on. Here are the answers to the most commonly asked questions about IPO.

How does the IPO process work? 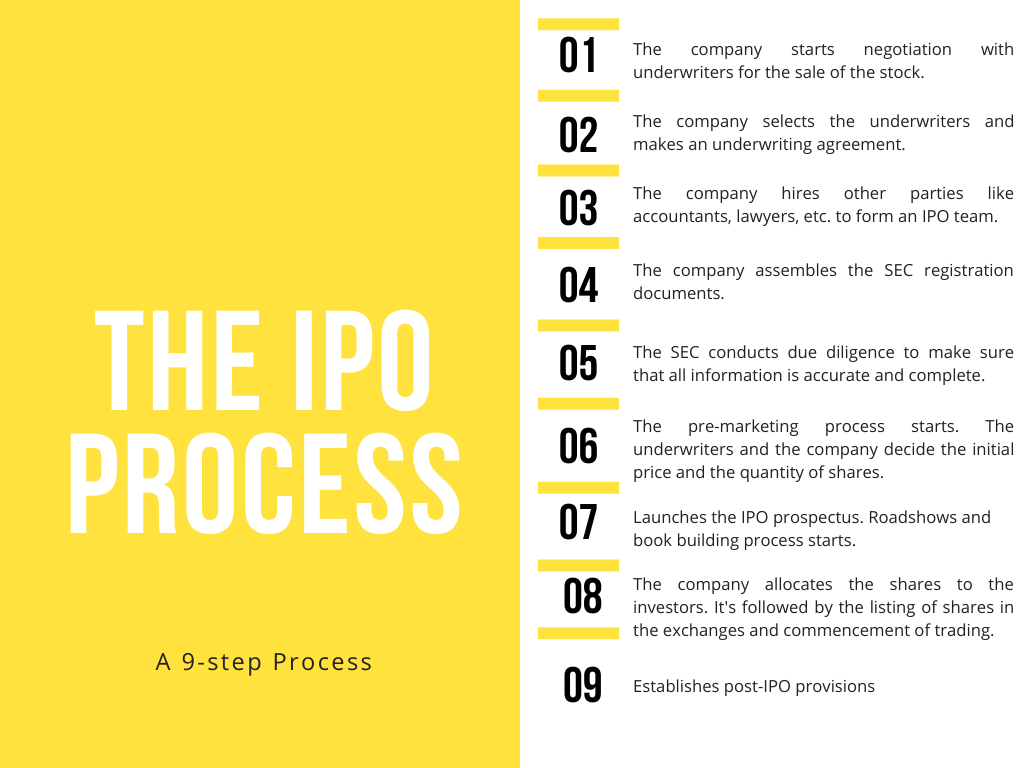 Is investing in an IPO is a good idea?

Investing in an IPO is not always a good idea. Just like shares, before investing in IPOs, investors should analyze the company in detail.

They should read the prospectus carefully before making the investment decision. A few things that the investors need to focus before going for an IPO are:

How can I buy IPO stocks? or How do I invest in an IPO stock?

There are two ways to invest in an IPO. If the investor is already a client of an underwriter, then he/she may get the opportunity to participate directly in the IPO. Usually, this option is available to HNIs and institutional investors.

For retail investors, to buy IPO stocks, they need to open an account with a registered stockbroker. The investors can place an order with the broker to purchase the IPO shares.

What are the pros and cons of the IPO? 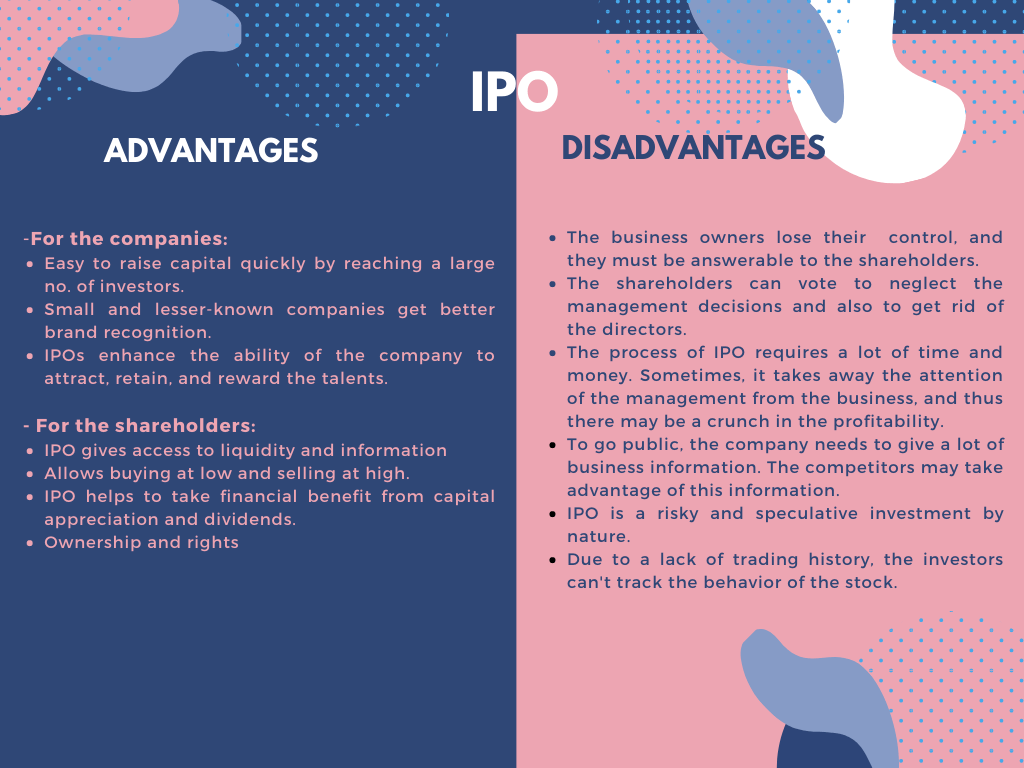 How do I find new IPO stocks?

The most reliable source for tracking the upcoming IPO is the website of the exchange. There will be an exclusive section for IPO on the site of every exchange. For example, on the website of NYSE, under 'Listing" there is an option called "IPO Center" which gives information on recent IPOs.

Apart from this, Google News, as well as Yahoo Finance, also gives information about all upcoming IPOs.

Can I sell IPO stock on the listing day? or Can you sell an IPO immediately?

Yes, it's possible to sell IPO stocks on the listing day. The IPO shares will be in the broker account of the investor, and he/she can sell it at any time after the listing. Once the stock has begun trading, the IPO shares can be bought and sold like other stocks.

Uber had terrible first-day trading. When the trading closed on the listing day of Uber, the price of its shares was down more than 7%.

What is the quiet period?

Quite period refers to the period enclosing the filing of the registration statement. During the quiet period, both the management and the marketing teams are not allowed to publish any research on the company. Throughout this period, the offer related communication should comply with the federal securities law.

What is Pre-IPO Placement?

The risk with private placement is that it's not subjected to some of the rules and regulations that are designed to protect the investors.

What happens if an IPO is not fully subscribed?

In the case of under-subscription (if the IPO is not fully subscribed), the IPO price is often lowered to create interest among the investors. It may often result in a situation that the issuing company is not raising the expected capital.

Usually, before the commencement of the IPO process, the issuing company gets into an agreement with the investment bank/ underwriters, stating that the latter should be required to buy all the unsold shares in case of under-subscription.

The reasons for under-subscription are over-pricing of the shares under sale, adverse market conditions like economic slow-down or recession, and poor marketing of IPO.

How is the IPO price calculated?

The issuing company and the underwriters together decide the offer price. They determine the offering price based on the market condition, the response in the roadshow, and analysis.

Often, the underwriters keep a lower offering price to attract more investors. Under pricing ensures that the issue either fully subscribed or oversubscribed by the retail investors. If an IPO is oversubscribed 2 or 3 times, then it's said to be a good subscription.

Does the price of the stocks usually drop after the IPO?

After the process of IPO, the shares of the company will be listed in the exchanges. From the listing day onwards, the shares will be trading like other ordinary shares.

Anyhow, on the first-day trade, the stock tends to witness significant fluctuation due to frequent change in hands. Depends upon the demand and supply, the price of some IPOs drops significantly on the first day, while a few witnesses a steep increase in the price. All these fluctuations depend on how strong the fundamentals of the company and also on the market sentiments.

What is the largest IPO in US history?

The IPO of Alibaba Group Holding Limited (NYSE:BABA) is the largest in US history. The company carried an IPO in 2014 and raised $25bn. Credit Suisse was the underwriter of this issue.

How long an IPO last?

The process of IPO lasts six to nine months. The process involves several steps. Some of them can be done simultaneously while the others go sequentially.

What happens to the existing shareholders in an IPO?

The existing shareholders have the option to hold private shares rather than selling them. They can wait for them to become public. When a company goes public, all the private shares will be converted into public ownership.

Why IPO is considered the high risk?

IPO investments are highly risky and speculative. In the recent past, immediately after the listing, many IPOs corrected significantly, and for an extended period, they traded at a much lower level than the listing price. Thus negative returns observed recently in IPO.

Due to the lack of trading history, it's impossible to track the behavior of the stock over a while.

Many small companies go for IPO. Due to their limited product range, petite customer base, and limited operating history, it's challenging to analyze the future growth of them.

What is an IPO closing date?

IPO closing date refers to the last day of the sale of the shares.

How can employees benefit from the IPO?

Many companies give stocks to employees in terms of appraisal or bonuses. When the company goes public, the liquidity of these shares also increases, and the employees can benefit from the price rise.

Several companies reserve a quota of shares for their employees in IPO, and these shares will be available at a discounted price. The employees can take advantage of the opportunity to acquire shares at a lower price. However, this is not mandatory for companies.

What is Regulation A+ IPO?

Regulation A+ or Title IV of the JOBS Act is an offering that allows private companies to raise capital up to $50mn from the public. Reg A+ is mainly designed for startups and the companies in the growth stage.

Reg A+ can be used for IPOs in NYSE and NASDAQ, and so far, several companies have used Reg A+ IPO.

The major advantage of Reg A+ over the conventional IPO is that it's less expensive, and the SEC filing process takes less timing for Reg A+.

Through Reg A+, the companies collect a small amount from a large pool of public. So, no investors will have enough shares to claim the controlling stake in the company. Thus for the promoters, there is no risk of losing control in the business even after Reg A+ offering.

What is an EGC?

EGC stands for Emerging Growth Companies. EGC is a new category of companies for IPO and is an issuer whose IPO was completed after December 8, 2011. The companies with total annual gross revenue less than $1bn fall in this category.

However, under the JOBS Act, a company can lose EGC status if:

RHP stands for Red Herring Prospectus. Filing RHP is the first step towards IPO. The companies those wish to raise fund need to file RHP with SEC. It contains the details about the company's business, financial performance in the past years as well as the SWOT analysis. RHP doesn't provide any information about the price or the number of shares being offered.

What happens to IPO money?

The money that the company raised in IPO will go to an exclusive account of the company. In form S-1 the company should disclose the planned use of the proceeds from the issue.

After the offering is completed, the SEC asks the reports on the actual dispersion of the proceeds. The typical uses include repayment of the debt, research & development, new acquisition, and business expansion.

The company will not get all the money raised in the IPO. A part of it will go to other parties who were part of the IPO, like investment banks, lawyers, and accountants.

How do shareholders make money in an IPO?

What happens when shareholders sell their shares?

There are two types of shareholders.

Majority shareholders hold a large chunk of the company’s shares, and when they sell, it may hurt the price of the shares. It can even cause a change in the controlling hands of the company. These ownership changes can have a significant impact on the business, especially if it’s a small business. On the other hand, the sale by a minority shareholder may not have any significant effect on the share price due to the lesser volume.

It's not common that the companies force their shareholders to sell the stake. Still, it happens in a few rare cases. One such example is that when the company gets acquired by another through a stock-based acquisition, and also the acquiring company is planning to hold the entire ownership in the target company, i.e., making it private. In this case, the shareholders must sell their holdings even if they prefer to hold them.

Can you be a shareholder and a director?

What happens if all directors resign from a company?

When every director of a company resigns from the board at the same time, the promoters can appoint an equal number of directors until the new directors are selected through the general meeting.